Zigzag is a 14-year-old Lusitano gelding, bred by Sherene Rahmatallah of Sussex Lusitanos, a small group of breeders specialising in these sensitive and intelligent horses. Zigzag has enjoyed success in the show arena and currently works at Advanced Medium level at home.

Katie Gilmour first rode a Lusitano with Tina Layton BHSI at Contessa Riding Centre, Ware, Hertfordshire, and fell in love with the breed. On moving to Sussex and seeking a horse to ride, she contacted Sherene, who suggested she ride Zigzag.

Zigzag is a true schoolmaster for those who can already ride well, but seeks to develop a stronger, more consistent position with better feel and sensitivity. Katie’s aim is to improve her riding and training skills and to become a ‘Luso rider’ in advance of taking on a new partner – a Luso of course! – to compete in dressage and showing.

“Zigzag is fairly close coupled,” Katie says. “Sometimes he gets blocked in his back and finds it difficult to work over his topline, particularly if his rider doesn’t maintain their position in his point of balance.”

“He has a big heart; he wants to please his rider, but it felt as though he simply couldn’t go forwards and he would stop. Just before Christmas, he felt particularly uncomfortable and his willingness was affected.”

Sherene carried out the usual checks on Zigzag, including his teeth and his back and became concerned that his saddle was uncomfortable. Sherene contacted her local Wow fitter, Nicola Purdy, because of Wow’s reputation for allowing full freedom of movement in all shapes and sizes of horses.

Wow boast Baroque styles in their range that are modelled on the Relvas type saddle, designed for showing and competing Iberian horses. These can be used with any of Wow’s huge range of panels, headplates and seats, to combine a classic traditional look with up-to-date sadddle technology.  Difficulties in fitting Iberians are consequently easily resolved.

With his new saddle made to order and fitted, Sherene and Katie both noticed an immediate difference in his work, and it became obvious that he had been hindered and constrained by the previous saddle’s fit. 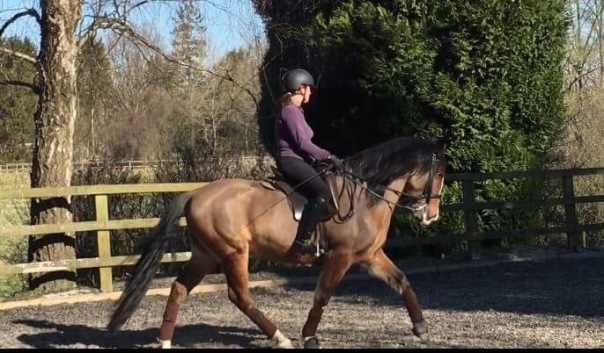 Katie says: “Ziggy is definitely a lot happier in his Wow; he is so much more forward-thinking.  He is a very sensitive horse, but now he is so comfortable, you can just enjoy riding him, and not feel like you  are treading on eggshells all the time. There’s now no tension in movements like half-pass and counter-canter. I have never seen such a dramatic change when saddles have been changed on other horses I’ve ridden. It’s lovely to feel such a difference. Ziggy really is a special horse and it’s heartwarming to feel him feeling so well.”