Alicia Griffiths’ story is one of resilience, energy, excellent organisation and determination.  She started losing her sight at the age of 19 and by 20 was registered as SSI, (severely sight impaired/legally blind, sport certification B2). She combines looking after her family, including  children of 6 and 3, and 10 month old Noah, with part-time work caring for cancer patients, and competing at the highest level of Para Dressage Grade 4. All of this is only possible with an extremely supportive family around her. As well as his work, her husband is fully involved in the care of the children; her mother maintains the horse and does its fitness work, and looks after the children when it’s Alicia’s turn to ride, or she is away competing. Her father drives them to competitions and calls the markers for her.  Her latest challenge is to compete in a Tough Mudder race, raising money for the Riding for the Disabled Association.

When she first lost her sight, Alicia was determine 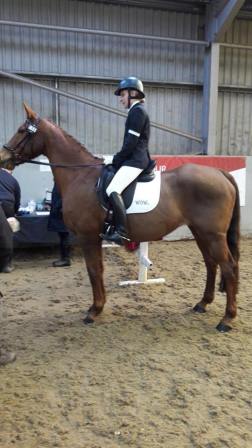 d to ride again, but without vision struggled with her balance and had severe motion sickness.  The RDA helped her through this, and she was lucky to have two well-bred dressage horses which she could compete both at Para – for team GB – and able-bodied – up to Advanced Medium.  Sadly, within the space of a couple of years, she lost both horses, and the search was on for a replacement.

One owner who responded to Alicia’s advert had a Thoroughbred which had been a hunt and riding club horse, with very occasional forays into dressage.  The lady now had insufficient time for her, and offered her to Alicia.  Appropriately dubbed Risky, the chestnut mare Just Arisca has her moments, but has proven to have the potential Alicia sought. The first year they were together, they reached the able-bodied Regional Finals at Elementary.

focus on Para dressage and did two excellent tests at her first International at Bishop Burton in 2016.  The next goal was to qualify for the Para Winter Championships, which she did.  Training was interrupted by illness in her support team but nonetheless Alicia made it to the Championships at Myerscough on a rather fresh Risky (Just Arisca). She got two good placings, with her best marks for Risky’s favourite movement, medium trot, where her Wow Saddle facilitates her natural swing while giving Alicia stability. To see a video including some of her test, visit : https://youtu.be/ZiuJC9HwV7c

Her Wow has an Extra Deep Seat, and modified Giant High flaps.

Previously, judges regularly commented “needs more jump in canter” but now the horse has all the engagement they want. In fact one recent judge’s comment about Risky was “Please deliver to my yard”!

Within four weeks of having the saddle, the fitter, Annie Lewis, had to change the headplate as even though the horse had been in regular work, the saddle was enabling correct muscle development for the first time. And for Alicia, the seat and flaps help support her and correct her tendency to lose her balance backwards because of the impact of lack of vision on proprioception.

Looking to the future, the goal is to represent England at the Para Home International, and compete at the Hartpury Festival of Dressage in the summer.  Before that, she has the commitment to run in the Tough Mudder.

Posted on February 27, 2018, in Uncategorized. Bookmark the permalink. Leave a comment.