“So it’s the week before the NAF Winter Dressage Championships! Both my lovely boys World Exclusive and Woodcroft Garuda K are going to be strutting their stuff! Wex will contest the open medium and open advanced medium championship and Garuda the inter 1 music. So it will be a busy old weekend for us. Exciting but busy!”

“The lovely weather has made training a whole lot easier and certainly more enjoyable for all of us! The next best bit was that Wex got his new saddle and I got my bling!”

“I am totally thrilled with it and so is Wex. I feel so lucky to have such support for me and my horses from WOW and Carly was lovely to work with. It was a cold grim day but Carly was very patient and we made a lot of adjustments. You certainly have to be open minded and have a sense of humour to be a saddle fitter, especially when I’m about!”

“We tested out our new saddle at Addington as I had the chance to run through the two tests I’ll be riding! Wex was super and won both the medium with a smashing 73.31% and the advanced medium with 68%. Building on that I had a good training session with David Trott where we worked on a few of the movement to see where I can squeeze so more marks out of the test!”

“Garuda had a trio out at the two day show at Keysoe, the first time we had to do two ‘ big’ tests. The inter2 on the Saturday and the Grand Prix on the Sunday. We were greeted with the most stunning weather and as usual the team at Keysoe had put together a great show. Including an international French judge.”

“Garuda won the inter2 convincingly on Saturday with a super 69.98%. Had I not let him tighten up in the right pirouette we would have broken the magical 70%. Super weather the next day for the Grand Prix and another good day of competition. Garuda was quite unimpressed that I upped the anti and wanted more height in the passage and a more on the spot piaffe! He logged this by having a little moment in the piaffe and then carried on as well as then adding two extra one tempis (17 instead of 15!) to ensure that he does have a say in our tests! So expensive mistakes as both were x2 movements leaving us third and 65.65% so all I’m all a good weekend.” 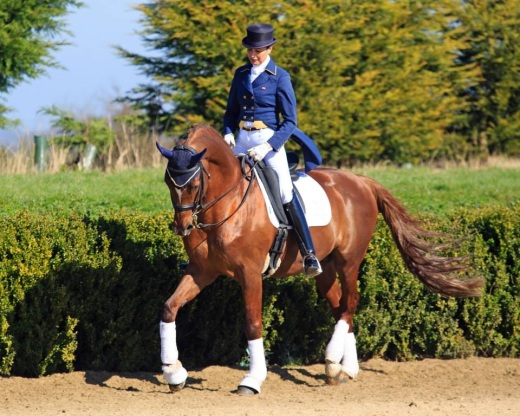 “The next move is to work on my ground plan for the Grand Prix kur. I must try and keep this easy for Garuda as I’m always trying to think of the maximum I can ask. (I’ve been watching Edward Gal’s test and thinking about movements!) I’ve found my music so now we have to put it all together and try and keep it simple! Garuda and I also had a run through our inter 1 music recently as I’ve not ridden it since the summer nationals, he has developed his trot since then, it was therefore important to make sure of my timings. This will be the last time I ride this test as he will be out of points (more than 15 points at GP and you can’t ride inter1) so it will be a good night for us to say goodbye to this test that I have enjoyed so much.”

“Straight after the winters we will have training on the horizon with Paul (Hayler ) before our premier league season starts at Keysoe. From then on it is pretty much full on for the summer! The other exciting thing will be taking out Garuda’s four year old daughter to the young horse classes! We hope next year it will be his son!”

“In amongst all this my husband is having a hip replacement op. It was supposed to be before Christmas but the usual NHS delays have meant he will be dropped off by me on Thursday morning and I will have to leave him while I go to the nationals. Poor chap all on his own! It’s so typical that timings like this occur! Tomorrow is his birthday so I will have to work hard to make it up to him! Like any partner of someone totally absorbed by the equestrian life he puts up with an awful lot! Thankfully he does actually ride so pretty much understands…. Most of the time!”

“So more soon….. After The Winters! I’m looking forward to catching up with Maggie and David from WOW as they will be at Hartpury for the duration. If any of you are there be sure to say hi!”