Richard Davison blazes a trail for the Brits at Greenwich

WOW Saddles sponsored Richard Davison (pictured below at the World Cup Final this year), was first of the Brits to go yesterday at the dressage Grand Prix at the Games riding Artemis.  A typically polished performance from the experienced campaigners gained score of 72.812 and the biggest cheers we think we have heard throughout the whole of the Games. It even appeared that Richard was fighting back tears afterwards. “Us blokes don’t always show our emotions but it gets harder as you get older,” Richard said…. Well done to you both!! 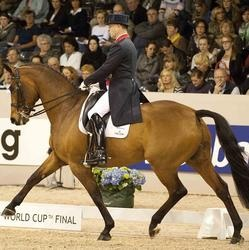 Charlotte Dujardin was last to go for the Brits (and the pressure was on after Laura B’s disappointing score, which left Britain and Germany very close in the team rankings). The pair produced a spectacular, stylish, unhurried and expressive test; the score was a massive 83.663.

Valegro is certainly a horse to rival Germany’s Desperados, a German horse that is a potential successor to Totilas in the “Wow” stakes. Charlotte pushed Team GB into the lead, and in doing so, broke the existing record for an Olympic Grand Prix test. “That was anther level out there,” said her trainer Carl Hester. “The horse is only ten years old!”

The show jumping started today at the Park, where team GB made a promising start – good luck, boys!